The Sun in the Shade

Take a good look at this picture. It looks quite profound and mysterious, doesn’t it? Today, I wish to share with you the message I think it contains. 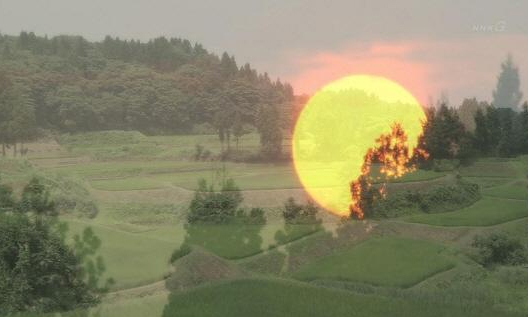 This photo is a scene from a TV drama that I really enjoyed watching recently. When the main character, who stayed true to himself throughout his whole life, even through brutal hardships, took his last breath, this scene was shown to express his life symbolically. It flashed by very quickly, but in that moment I felt a powerful sensation. So I paused the show and examined it intently for a long time.

There is a verse in the Chun Bu Kyung, an ancient Korean spiritual scripture, which reads “Bon Shim Bon Tae Yang.” It means that the true essence of human beings (Bon Sung) is bright like the sun. Our unchanging essence is our moral conscience—a combination of our heart and mind that emanates a strong and bright inner glow.

However, more than a sun that is too bright and strong, I like the sun that shines in the shade of trees. While we have a core or conscience that’s bright like the sun, we also have emotions and personal desires that shade our light. As long as humans have a physical body, no matter who they are, they have loneliness, insecurity, and fear. I think that life is using both light and shadow harmoniously. Rather than being a slave to our emotions and desires, we can use them in service of our light.

But first, we need to accept them. Rather than denying they exist, or beating ourselves up because we don’t measure up to a particular set of rules we’ve chosen, or arguing within and among ourselves about right and wrong, we should extend a little compassion to ourselves and those around us. Remember that it’s natural for conscience and selfish desire to coexist together in everyone. So why not see the world with respect and love?

Because just as the sun shines even through the shade of trees, our unchanging, bright essence shines through our imperfect egos and emotions. It’s because of that shade that the sun is even more precious. And the contrast between light and shadow allows us to see both.

If we keep learning and practicing, we can become better and better at making choices that make our inner light shine brighter. However, if we fight and blame the shade that covers us, we will only see the shade and may forget about the light.

What needs to guide our choices is our dream. Do you have a dream to be fully aware, to exist in a continuous state of oneness with your divine nature and with the universe? When you resolve to manifest this dream by actualizing a more harmonious and peaceful world, you have the best moral compass. If you keep steering yourself towards that goal, you can use your emotions and desires in service of it, rather than being tossed around by them. Then no matter how dark a shadow may cover you, your bright essence will someday freely shine through with blinding radiance.