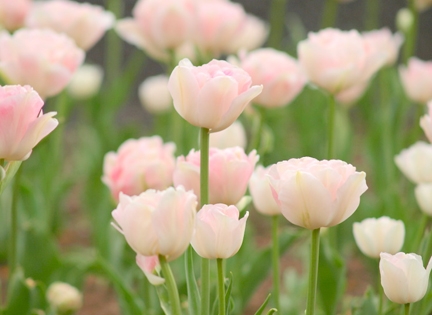 My poem, “To the flowers,” comes from a desperate desire for awakening, through flowers, to the mind of the Creator who created this earth and humans.
As you look at the flowers with Chunjikiun and Chunjimaum, known also as cosmic energy and cosmic mind, I hope you enjoy this poem.

Ask the flowers
Ask the flowers
What they became flowers for
For such a long time
You don’t know how they’ve looked forward
to your asking them these questions.

Thus, they undergo difficult trials and tribulations
for a small sprout to become a bud
and a bud to burst into a bloom;
they use all their strength
and then return to nature.

What should we learn from this aspect of the flowers?
Coming from nature
and returning from nature
is the same in both people and flowers.
We must all know that,
just as the mind of the creator is instilled in the flowers,
human beings, who have received the creator’s love,
are the ultimate spiritual beings born into nature.

It is human beings and it is people
who gave names to the innumerable flowers.
However, humans are not aware of
the flowers’ destiny or their message.

Flowers are not just beautiful.
Within the flowers are much patience, effort,
and diligence.
They invest tireless effort to achieve completion as a flower
before returning to nature.
Without causing any harm to nature,
flowers deliver messages of nature’s intention and love,
and without complaint or dissatisfaction, they return to nature.
This is the true nature of flowers and their mind.

You have to know why earthquakes and tsunamis are taking place on this Earth
and abnormal climate changes with raging storms, wind, rain, and thunder are appearing,
why countless people are living in the midst of pain, sadness, poverty, and sickness
as they’re driven towards the brink of death.
People who manage the earth and take responsibility for it must know
that countless people born on the earth
as the Creator’s children and through heaven’s love
are crying out that they are not happy.

Through the sounds of nature, through the messages of the flowers,
people must now realize
what they are doing.
People need to know what they have done
to the earth and the lives living on the earth right now
while they’ve been caught up in a drug called success.

Everyone will go back to nature when their time comes,
so it’s time to think about what kind of face you’ll have
when you’re face to face with nature,
and reflect upon yourself.
By examining the work that you’ve done
and performing honest evaluation and checking,
a new future can be created for humanity.

It’s our choice now.
Won’t you give love and hope to the flowers?

Receive weekly inspirational messages from Ilchi Lee:
Previous Post
Where Are You Going?
Next Post
When Everyone Practices Meditation