Can Our Economic System Really Change?

Last week, a reader from Nevada sent me the following question:
“What is your vision for a new economic system? It is true we live on an abundant earth, but the vast portion of humanity lives a life of tragic lack due to the worldwide economic system. I see it falling now, and wonder what we will put in its place.”

I agree. Human beings have received so many blessings from the earth, it’s practically too much. The bounty of nature is more than enough for all of humanity to live on. But humanity as a whole takes more than it needs. It has only focused on possessing material things, and has been very tight-fisted when it comes to sharing. Moreover, many people try to take away and control what others have. As a result, the human civilization has had as much as it can take of the current crises. The natural environment is becoming more and more imbalanced at an incredible speed. Materialistic values still supersede humanistic ones so that isolation and a sense of loss are prevalent in human society.

So what needs to change?
Humanity’s world view, the value system that is underpinning the current economic system, needs to change. It may seem like humans have achieved notable growth over the past few millennia, but there actually have not been significant changes in the world view that flows through the foundation of human civilization. So far, humanity has pursued external growth centered on material values. The goal has always been the accumulation of land, money, and power. The competition to acquire more of the limited resources, and the conflict surrounding distribution, has never abated. If you look at the decisions made by both individuals and groups or governments, external growth is regarded as a virtue.

Underlying such a perspective is a persistent worldview of dualism that sees the world with the eyes of separation, conflict, and confrontation. Even nature is seen only as an object to be conquered, or a lump of resources whose only value lies in its utility. As a result, today’s competitive, unsustainable, and self-destructive civilization was made. 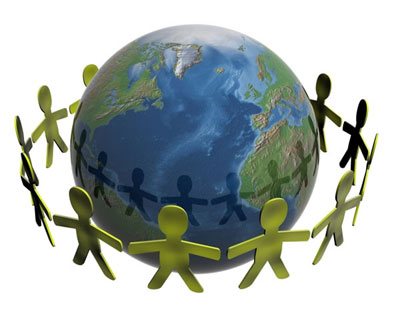 Instead, humanity’s value system needs to shift from possession to sharing, from success to inner growth and completion. That is the only way that humans can avoid self-destruction and develop a mature civilization that utilizes material things for humane values. To make that shift, we need to adopt the concept of a collective self.

You may wonder whether human beings are fundamentally only able to be selfish and competitive. Certainly, we have those attributes. But I think we definitely have the opposite attributes built into us as well. We have a Hong Ik instinct that desires everyone’s happiness.

This inherent instinct to share and cooperate with others is contained in the human brain. It’s not a set of moral values humanity needs to strive to adopt, but rather our biological design. Our brains produce “feel-good” hormones when we make harmony with others and benefit them. But often this potential is latent and lies dormant.

That’s why awakening the potential for greater benevolence, philanthropy, collective thinking, and peace in our brains should be an important focus of our education, and is the reason why I developed Brain Education. Brain Education helps individuals rediscover the value of the brain and bring out its power.

The shift in self-awareness and perception that needs to occur must take place in not just one or two people, but on a global scale. When these instincts are alive within much of humanity, we can have a collective discussion about how to create an economic system based on sharing and having enough for everyone.

Is a new world economic system of sharing and cooperation possible? Dare we hope?
Instead of asking these questions, I would like to ask instead: Why do you earn money? Do you have a philosophy about how you make and spend money? When you have a philosophy, you can uphold the principles and values you’ve set for yourself. The same applies for humanity as a whole. Depending on what value humanity pursues and chooses for the sake of improving the quality of its life, we could repeat the patterns of thousands of years, or we could write a new history.

There is definitely hope. However, hope doesn’t materialize immediately. We must boldly choose and create new hope over and again. The power to choose and create, that’s the power of your brain.