Do You Use Your Natural Brain?

I first met the late Ju-yung Chung, Honorary Chairman of the Hyundai Group, in 1987. I was a young man in my late thirties then. It was about two years after I had opened the first Dahn Yoga center, originally under the name Dahnhak Seonwon, in the Shinsa-dong region of Seoul. By then I had opened 12 centers across South Korea, and was in the midst of a nationwide lecture tour when I started giving him private lessons for several months.

During that time, Chairman Chung related a story to me that I think illustrates what I’ve often called a “natural brain”. A natural brain is a brain that freely and infinitely creates for its own goal without imposing limits on itself. On the other hand, a “farmed brain” is used only to the extent allowed by the limited information learned within the framework of institutional education.
As a teenager, Chung ran away from home four times to try and escape the poverty of his family. Each time, his father brought him back. But after the fourth time he was successful.
After taking on a series of jobs such as loading and unloading ships at the docks in Incheon and working as a handyman in a starch syrup factory, Chung landed a job with a rice dealer. Given his unfortunate circumstances at the time, being hired to make deliveries for the Bokheung Company, was probably an incredible turn of fortune. It was a stable job that had room for growth, and he was reportedly fed lunch and dinner and received a salary of one bag of rice a month.

However, Chung did not know how to ride a bicycle very well, which was the most important skill a rice deliveryman should have. In fact, the first question the store owner asked him was whether he knew how to ride a bike. Since he had ridden a bicycle before, he told him, “Yes.”
Chung made his first delivery on his fourth day on the job. It was a rainy day, and since his riding skills were weak, he crashed and wrecked the bike. The bags of rice and beans he was delivering were covered in mud and ruined.

Fortunately, he avoided a crisis thanks to the understanding and kindness of the woman who owned the store. That night, however, he learned the techniques and skills required of a rice deliveryman from someone who had been on the job longer. For four sleepless nights he practiced making deliveries. It wasn’t long before he became the best deliveryman out there, weaving in and out of the crowded streets on his bicycle like a swallow on the wing, even when he was carrying two bags of rice instead of just one. 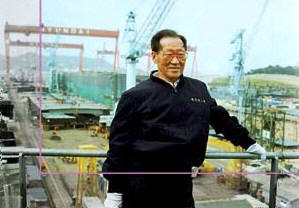 When many people encounter unknown circumstances or things they cannot do, their brains freeze up, immediately establishing self-imposed limitations. The brain of Honorary Chairman Chung, on the other hand, did not recognize such self-imposed limits. When everyone else said something was impossible, he always asked, “Have you tried it?” Because he ceaselessly challenged his limitations, Chung’s brain is a model of a natural brain.

Such an adventurous spirit arose out of his belief in his own infinite potential, his powerful passion for success, and his strong will. A natural brain cannot help but be successful. Such a brain endlessly challenges itself to try the new, the unattempted. Refusing to be frustrated by failure, it takes such experiences and turns them into stepping stones for success.
Every brain has the potential to be a natural brain or a farmed brain. Which one is yours right now?

Receive weekly inspirational messages from Ilchi Lee:
Previous Post
A Video About Gratitude
Next Post
To Achieve Your Dreams, Use Your Primal Information