There is an ancient creation story passed down from the part of the Earth that is now Korea and recorded in the Budoji, an ancient text. 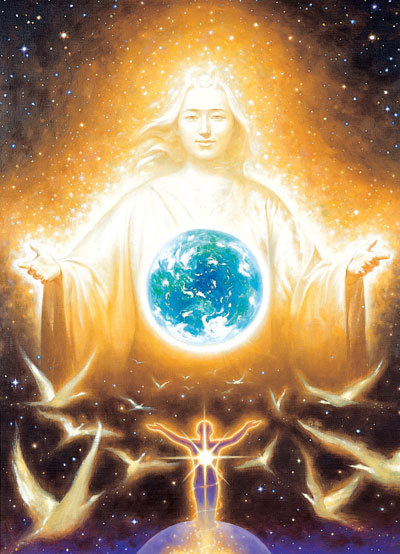 According to the Budoji, in the beginning, everything was pure energy. Then, matter came into being and Mago, Mother Earth was created.

On the Earth was a paradise known as Mago Castle. It was at the highest place on Earth.

Mago joined with the energy of heaven and gave birth to the beings Gunghee and Sohee to give life to all living things on Earth.

The names of the women are long forgotten, but the names of the men are remembered as: Hwang-gung (Yellow Dome), Baekso (White Nest), Chung-gung (Blue Dome), and Heukso (Black Nest).

These men took charge of the true sound of all creation, which comes from the four elements of fire, water, earth, and ki. Hwang-gung created with the solid earth, Baekso used the gas form of ki, Chung-gung used the liquid water, and Heukso took the heat energy fire to take care of the Earth and Mago Castle.

Baekso and Heukso together controlled the air and temperature so that there would be no coldness or darkness in the sky. Hwang-gung and Chung-gung controlled the character of the soil, the amount of rain and snow, and the flow of water so that all living things on the Earth could have a blessed and peaceful life.

The descendants of these men formed four tribes in Mago Castle, where all lived in natural harmony with each other and the Earth.

These original humans were quite different from the humans of today. Because they survived only on the milk given freely by Mago, all humans had a pure heart and clear blood and energy, which ensured that their ki energy flowed freely within their body and allowed them to hear and understand heaven.

With their connection to both heaven and Earth, they also had the power to create matter from energy easily. The people of Mago Castle were able to turn their bodies into pure, golden energy to preserve them after finishing their daily work, and therefore could communicate without sound, travel without form, and live eternally.

Receive weekly inspirational messages from Ilchi Lee:
Previous Post
Your Soul Is Not Your Emotions
Next Post
Character Is Love