When I recently spent a month in New Zealand, I discovered that the natives of New Zealand have a secret of enlightenment. They have a special greeting they use when they meet someone and want to become close to them—they rub noses with the other person and breathe together. They call this a hongi. This greeting is an expression that means, “I trust you,” and, “I love you.” Breathing together is sharing energy with each other. It says to each other, “You and I are one.”

Not just anyone touches noses and breathes together, however. They do that when they are in a family-like relationship in which they can trust each other. Leaders and dignitaries also greet each other with a hongi as a sign of trust. 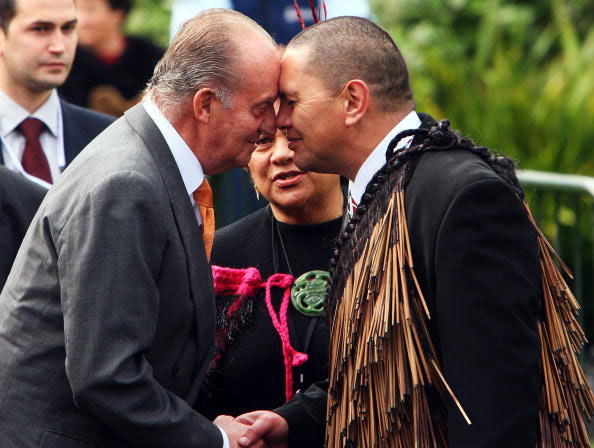 In Korea, we usually eat together if we want to become close to each other. The relationship of those who eat together is a good, mutually trusting one. Of course, there are situations in which this is done as a matter of strategy, but it’s an expression of goodwill regardless.
The way the natives of New Zealand get to know each other seems more honest and intimate. Although you could eat a meal with someone you don’t much like, it wouldn’t be easy to rub noses with them and breathe the same breath.

I think it is a very good method for expressing emotion. In that sense, their culture is ahead. You advance one step further, though, if you know that we are all connected with each other through breath. Then you know that we breathe together even though we don’t touch noses. That is enlightenment.

Still in an Uncivilized Culture

National boundaries were created by people. The atmosphere, though, turns around the whole planet. Even though we live breathing with our noses stuck up in the same sky, we’ve had much pain and sadness in a history of failing to trust and love each other and of seeking to possess and control each other. That is an uncivilized culture far behind that of the New Zealand natives. No matter how much science has developed, and even though we have airplanes and cell phones, such a culture is uncivilized.

What’s important is that it requires an enlightened mind. That’s why we all have to use our minds well. And the whole must change. Human consciousness must change.

What It Takes to Change

Many people do nothing more than worry, and the planet continues to sicken. They are focusing on acquiring more power, on acquiring more money, and on satisfying their own desires. Well-educated people are this way, too, and all institutions are failing to break out of this mold. It’s because of the boundaries created by the inward perspective of religions, nations, and other institutions. Imagine if, instead, we could all figuratively rub noses and breathe together.

First, it takes hope. Those who have a lot of hope can, sooner or later, bring those flowers of hope into full bloom and create a world of happiness and peace. Such a world will never come, though, to those who think it impossible. Why? Because such a world is not created by fists, and it is not created by money. Such a world is created only by the mind. By mind, I don’t mean the accumulation of knowledge; I’m referring to an enlightened consciousness.

TV and other mass media play an important role. If you take a look at the different kinds of information coming out of the TV these days, you’ll see that so much of it is strange and unrelated to enlightenment. My heart really aches to witness it.

The most important thing we need to use well is mind. Mind is where everything is first created and where it all starts. Do you have a mind of happiness and peace? Do you have hope in your mind?