On March 4, 2015, Ilchi Lee participated in the first term graduation and second term induction ceremony for the Benjamin School for Character Education at the Institute of Korean Cultural Studies in Cheonan, South Korea. He spoke to the gathered audience as the founder of the school and the president of the Global Cyber University. Parents, educators, and visitors from South Korea, Japan, China, the United States, Canada, Ireland, and Russia were in attendance.

Students, administrators, and dignitaries gather for a group picture.

Led by Principal Na Ok Kim, the Benjamin School for Character Education is a futuristic alternative school that is drawing interest as a new model of education for Korea. The Benjamin School was launched on March 4th of the previous year for the purpose of developing global prodigies of character and integrity who make completion of their strength of character the purpose of their life and are self-directed and creative. Called “one year that changes your life,” it had twenty-seven students in the first term, who demonstrated huge accomplishments over the one-year program. They each showed a tremendous amount of growth through online and offline activities including a personal project called the Benjamin Project, part-time jobs, and work experience, and they drew media attention as outstanding cases of character education. 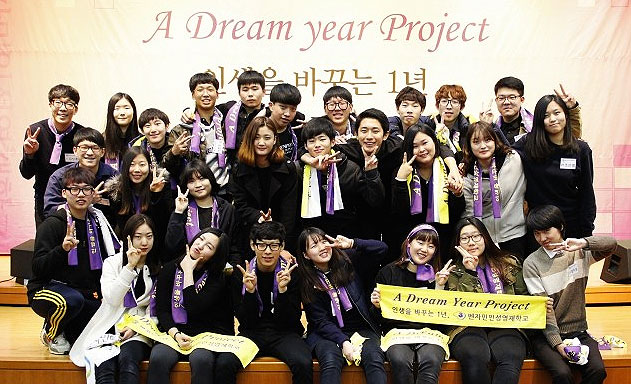 As the self-directed and creative educational format of the Benjamin School became known, over 1000 students with dreams and talent applied for the second term. The students went through a three-step application process, and 479 students were admitted. The admitted students included seven younger siblings of the first term students. There were cases of brothers and sisters being admitted together, and one foreign student from Paraguay was also admitted. 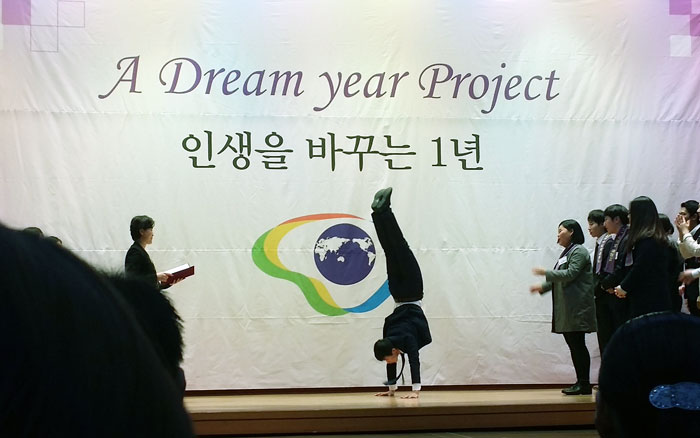 Some students walk on their hands to receive their diploma, as they learned at the Bejamin School for Character Education.

Besides Ilchi Lee and Principal Kim, the Honorary Chairman, former South Korean Prime Minister Suseong Lee, also gave a speech. A festive atmosphere was provided by congratulatory performances by soprano and professor Mikyung Jo and guitar duo Philos. One member of this younger brother and college-age sister duo, brother Hajin Jung, will attend the second term of the Benjamin School.

During her introductory speech, Principal Kim congratulated the graduating class, saying, “These young people turned the difficulties of the past year [with the Sewol ferry tragedy] and created a year shining with hope. The first term class chose to find their dream, and in the world outside of the classroom, created their own unique story of developing character and connecting with their humanity.”

She went on to say, “Now, I ask the students of the first term graduating class, who have matured into global leaders, unfold your dreams where you stand with confidence, and become models for your juniors. Newly admitted students, I hope that you inherit the passion of your first term seniors and challenge yourselves to your heart’s content. Parents, truly believe in your children and wait for them, and just look over them so that they can make their own flowers bloom. We are gathered here to become the foundation for character education in Korea. I’m very excited to see our children, who have outstanding brains, growing into the happiest children and into global leaders.”

Honorary Chairman of the Board of the Benjamin School and former Prime Minister Suseong Lee said in a moving speech of encouragement, “When the students of the graduating class and entering class here become adults, you will proudly say that you know who you are, that you value yourself, that you love nature, and that you are living your life in a way that makes it worthwhile. Tears will flow from the parents of the young people here because they are so happy just to see the way they live. It may not be visible to the eye, but our country and our people will be grateful to you. Thanks to you, Korea will be a country that upholds its pride and dignity.”

In his own lecture that day, President Ilchi Lee introduced “egg hatching meditation.” He reflected on his experiences with the animals at the meditation center he’s developing in New Zealand as he shared his awakenings about life and the value and importance of creation. Each member of the audience had brought a raw egg in anticipation of this speech: 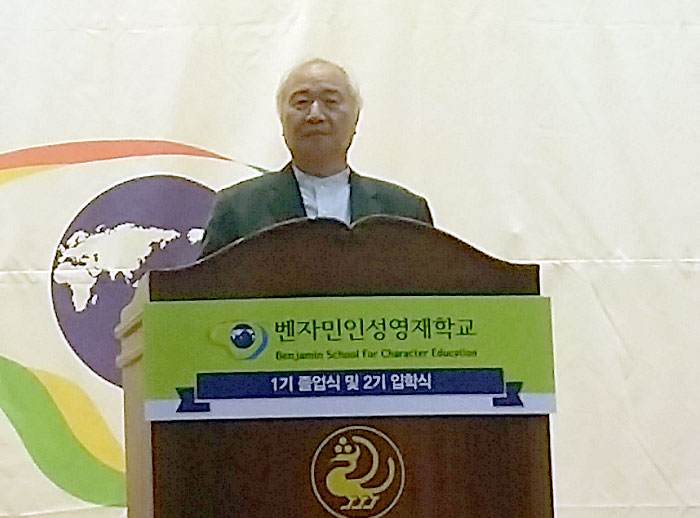 Ilchi Lee shares his awakenings on self-development and growth.

“Usually, when a hen sees a person, they’re afraid, but a hen that’s sitting on an egg is not only unafraid, but pecks at the person. In this way, the hen stakes her life to incubate the egg. Hold the egg in your hands and focus on the egg. When you focus on the egg and feel the temperature, what you think of as yourself disappears and only energy remains. That temperature is what makes the chick. The miracle of life comes from your hands. As the spark of new life arises, the change of recovering character, the change of natural healing power, and the change of creation that comes through awakening about life take place. In the same way that the chick hatches from the egg through love and attention, you will experience the hatching of a new birth as a model of character and integrity at the Benjamin School.”

The graduation ceremony began with a video and performance about the story of the students’ growth over the past year. The students gave a remarkable performance that showed the process of a caterpillar growing into a butterfly with glow-in-the-dark hula hoops to enthusiastic cheering and applause from the audience. 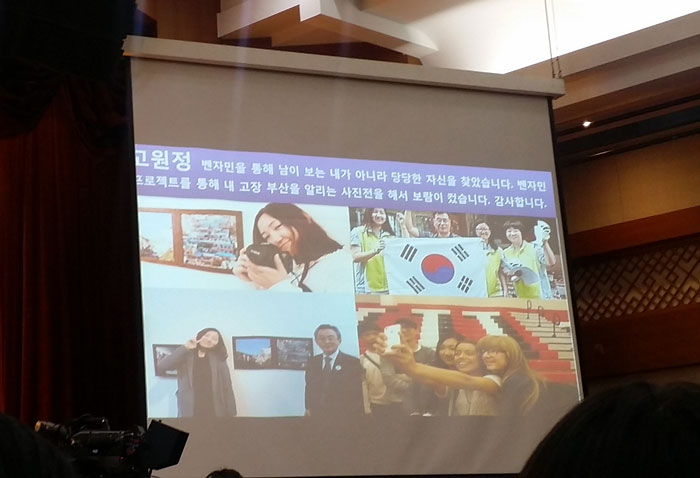 Additionally, as representatives of the first term class, students Sunghoon Yang, Kyubin Sung, and Eunbyul Jo presented words of gratitude. They shared what they felt about graduating, saying, “As we attended Benjamin School, things that we couldn’t even imagine became reality. If we can be brave, we can accomplish it, and I am grateful to the principal and teachers of Benjamin School and to President (of Global Cyber University) [Ilchi Lee] who founded the Benjamin School.” 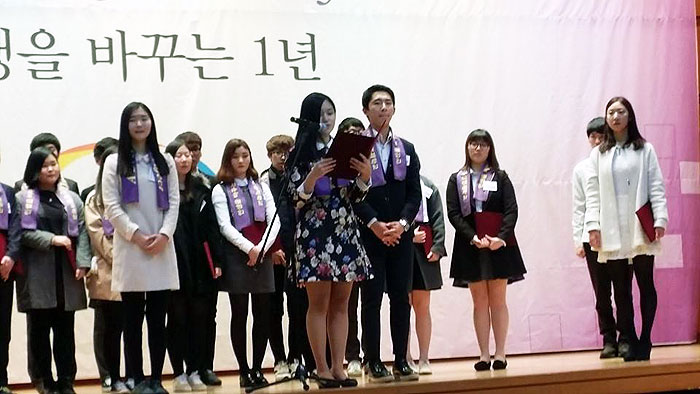 This graduation featured a very special honorary graduate—the late Jaewook Lee, who left the world too soon last year in the Sewol ferry tragedy. He was a junior at Ahnsan Danwon High School at the time of the incident, but in May of last year, he became an honorary transfer student at the Benjamin School for his long-cherished wish. Jaewook’s father, Seungchul Lee received a diploma on behalf of his son.

The second term students of the Benjamin School have 150 main teachers at sixteen experimental learning centers throughout South Korea to guide the students, and about 500 professionals as mentors, who will help the students with work experience and Benjamin Projects. And for the first time in the country, a university-level online Learning Management System (LMS) was developed. With access to a two-way video conferencing system and more, the diverse activities of all of the Benjamin School students will be shared online. More than anything, the school’s experiential curriculum, which is based on Brain Education and traditional Korean culture studies, provides the foundation for developing the creativity of the students’ brains as well as their strength of character. 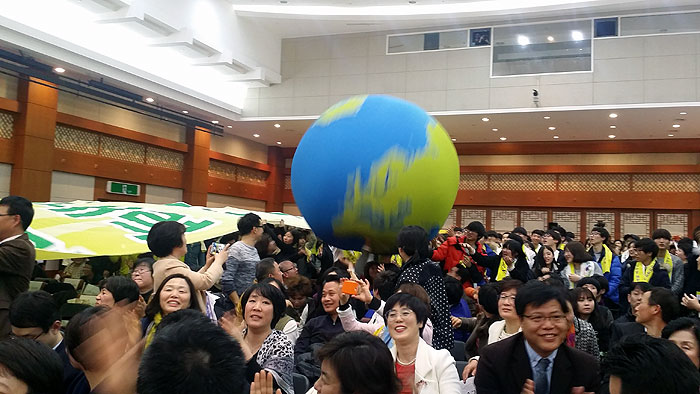 Celebrating a new era in education.