Five Principles of the Universe

In this last blog post I’m writing about the Chun Bu Kyung, l’d like to review the last month with five principles you can extract from this profound text:

1. The Principle of Creation and Evolution 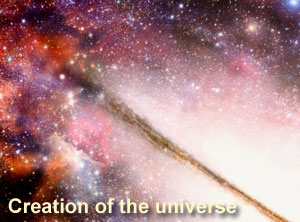 The Chun Bu Kyung contains a single law of cosmic motion—creation and evolution of everything in the universe physically, spiritually, and energetically. It says One (Il) Source of all life has always existed that has no beginning or end. It divided into three, Heaven, Earth, and Human, or the spiritual, material, and energetic. In each of these, the other two exist. For example, humans are made from Heaven and Earth. From these three countless forms were created as individual and unique expressions of the One. All of the creation appears as a result of chemical reactions occurring, atoms and molecules gathering and scattering. These things develop not as a result of continuing on forever, but of a turning, of going back.

That’s why human beings do not have improving health without limit, nor do they grow endlessly younger. The law governing all things is that, when we have come near the end of our development, we must think, “I’m done now.” The Chun Bu Kyung shows this progression in numbers. From six, then seven, eight, and nine appear and there comes a turning. Sooner or later, we all come to nine and return. Coming back to Un (circulating around), we are zeroed and we start again. Everyone and everything evolves and eventually disintegrates, returning to the One for the cycle to begin anew.

Not even the Earth can escape from the law of creation and destruction. Just as our bodies cannot be places of eternal refuge, the Earth cannot be a place of eternal refuge. Just as our bodies eventually enter a period of stability is called “death,” the Earth, too, is now seeking to enter a period of stability or hiatus. If you look at the Earth lately, you’ll see that the planet is worn out, that Heaven and Earth are sick, and that, sooner or later, the time will come when the planet will go into hibernation. It cannot be an eternal refuge.

2. The Principle of Energy Circulation: Water Up Fire Down
Water Up Fire Down is the healthy and harmonious energy circulation that takes place in our body. Water energy must travel up the energy channels along the spine, while fire energy must travel down the energy channels along the front center line of the body.The Chun Bu Kyung says, “Sam Sa Seong Hwan” or three and four make a circle. In this case, three means the three major internal energy centers of our body, which are known as dahnjons in Korean. We have a lower dahnjon in our lower abdomen, a middle dahnjon in our chest, and an upper dahnjon in our head. 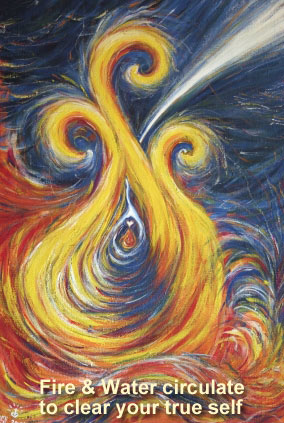 Then comes “Oh Chil Il,” or five, seven, one. Five is earth (土), seven is fire (火), and one is water (水). Five makes the heart and mind its center, and water comes and goes through it countless times, with great, marvelous mystery, turning and going back, changing again and again (Sahm Sa Song Hwan Oh Chil Il Myo Yeon Mahn Wang Mahn Rae, or Three and four make a circle, five and seven make one whole, countless comings and goings). When this process is stable, we have Water Up Fire Down. The life force within us flows freely, bringing infinite creativity and joy to the soul.

3. Principle of Illumination of True Self
“Bon Shim Bon Tae Yang Ang Myong” tells us to make our true self shine as brightly as the sun. Your true self is already like the sun. We just need to keep polishing the dirt that continually covers it so it can shine through. When we have Water Up Fire Down energy circulation, the flow keeps our true selves clear. It’s like the difference between a stagnant pool of water and a clear babbling brook.

4. Principle of Cosmic Unity
“In Jung Chun Ji Il” speaks of oneness with the cosmos. Everything in the universe is one part of one whole. We can experience this oneness inside us, because of the divine-human unity containing both Heaven and Earth. This experience is fully integrated in our being when our true selves in our heart, or fourth chakra, joins with the divinity in our brains, or sixth chakra, and then emerges through our seventh chakra in the top of our head to join with the energy of the universe. This process is called “Shin In Hap Il,” for those of you who have taken the Healing Chakras workshop.

You can see this principle in the everyday maintenance of our lives. The air of Heaven, or Heavenly energy, enters through the nose. The energy of the Earth enters through the mouth in our food. Life is maintained only if Heaven energy and Earth energy meet in our body. All people need air and food and water to live, regardless of their race or nationality. 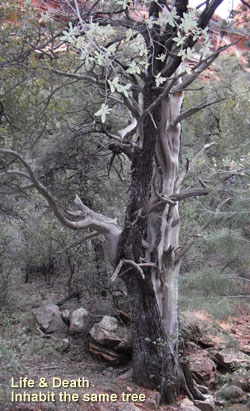 5. Principle of Eternal Life
We are One, and the One has no beginning or end. It is an end without end. It lives forever.

The 81 characters of the Chun Bu Kyung, though they seem to be something else, mean that all is one. The One (一) is the beginning (始); the One is the end (終); and the One is nothingness (無). That One is the essence of the life we know. The One (一) speaks of Cosmic Energy (Chunjikiun). It speaks of the Source. The One (一) is the Source, and, although it is the beginning, it is has no beginning itself (無始). It is the Beginning without beginning. As for the One end (一終), the One may be the end of all things, but it is the End without end. It is the Alpha and the Omega. It is the world of absolute life transcending space and time, where it is impossible to make distinctions even in space-time. When I awaken to that world of life, I am life, self-existent and alone.

Receive weekly inspirational messages from Ilchi Lee:
Previous Post
Shine Brightly in the Now
Next Post
An Invitation to Sedona