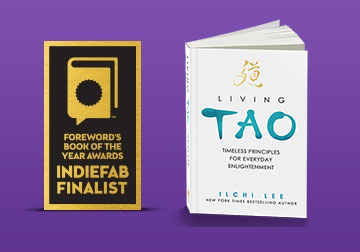 Foreword Reviews, a media company devoted to reviewing books from small, independent publishers and university presses, announced the finalists for its 18th annual INDIEFAB Book of the Year Awards on Monday, March 7, 2016. Living Tao: Timeless Principles for Everyday Enlightenment by Ilchi Lee (Best Life Media, December 2015) numbered among the finalists in the Body, Mind & Spirit category. Ilchi Lee said he felt so grateful and happy about sharing Tao with many people through this opportunity.

Each year, Foreword Reviews shines a light on a select group of indie publishers, university presses, and self-published authors whose work stands out from the crowd. “The 2015 INDIEFAB finalist selection process is as inspiring as it is rigorous,” said Victoria Sutherland, publisher of Foreword Reviews. “The strength of this list of finalists is further proof that small, independent publishers are taking their rightful place as the new driving force of the entire publishing industry.”

In the next three months, a panel of more than 130 volunteer librarians and booksellers will determine the winners in 66 categories based on their experience with readers and patrons. Foreword Reviews will celebrate the winners during a program at the American Library Association Annual Conference in Orlando, Florida in June. They will also name the Editor’s Choice Prize 2015 for Fiction, Nonfiction and Foreword Reviews’ 2015 INDIEFAB Publisher of the Year Award during the presentation.

Living Tao is Ilchi Lee’s thirty-eighth book and distills the principles he has spoken and written about for decades into their essence. The simple wisdom it contains about life, death, and everything in between has been called “thoughtful, easy to follow,” by Ray Simmons for Readers’ Favorite. It “lays out the principles of Tao in a practical way that everyone can grasp and begin to apply to their daily life,” he says. Readers have written that Living Tao has given them comfort and clarity during troubled times.

Foreword Magazine, Inc is a media company featuring a Folio:-award-winning quarterly print magazine, Foreword Reviews, and a website devoted to independently published books. In the magazine, they feature reviews of the best 170 new titles from independent publishers, university presses, and noteworthy self-published authors. Their website features daily updates: reviews along with in-depth coverage and analysis of independent publishing from a team of more than 100 reviewers, journalists, and bloggers. The print magazine is available at most Barnes & Noble and Books-A-Million newsstands or by subscription. You can also connect with them on Facebook, Twitter, Google+, and Pinterest. They are headquartered in Traverse City, Michigan, USA.

Receive weekly inspirational messages from Ilchi Lee:
Previous Post
Breathe the Divine
Next Post
What I Really Want to Tell Everyone