I spent the last week in Florida because I had several speaking engagements there. One evening, as I walked around town, I heard some vibrant Spanish guitar music. I was immediately captivated, so I sat down for a while to enjoy the guitarist’s performance.

He was an incredibly dynamic performer, and throughout his vigorous and impassioned performance, he swung his guitar all around himself. It was something I’d never seen before. In addition to his emphatic strumming and flair, this man would hold his guitar aloft as he played, as well as behind his head and even with just one hand. Sometimes he beat it like a dream. Rather than simply plucking the strings, he made every possible sound with the instrument. In fact, he used his whole body to play his guitar. 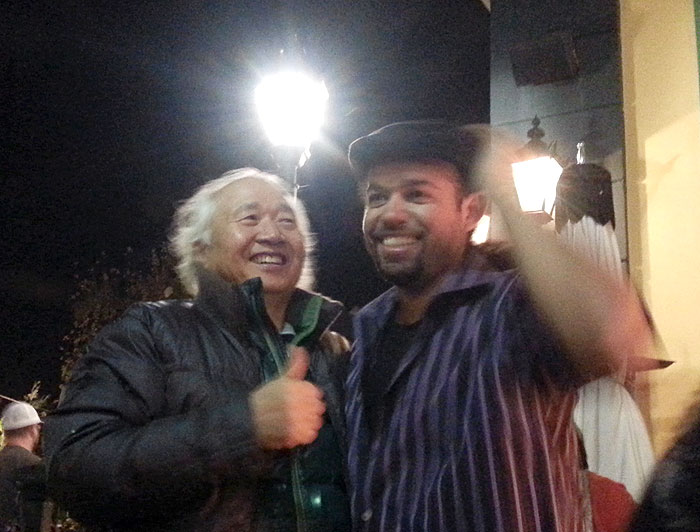 I’m already fond of Spanish guitar music, but anyone could see that this guitarist—Nicholas Marks—was playing his heart out and having the time of his life. He played with total freedom, and everyone in the audience couldn’t resist bouncing to the beat. I laughed and danced, and we smiled to each other in acknowledgment of our connection when our gaze met across the courtyard where he was playing. This was clearly how he expressed his soul.

I purchased a couple of his CDs, and after he completed his performance, I asked him to sign one for me. We shook hands, and then I asked if he’d like to join me for a drink.

Nicholas came to sit with me at an outdoor table, and we had a delightful conversation. He was born in Pennsylvania and was of gypsy heritage. He never went to school, but was educated by his parents at home, and he seemed very satisfied with that.

I asked if he could read music, and he said he never learned. He told me that he’s been playing the guitar for 25 years. He received a guitar from his father as a gift when he was ten years old, and his father had taught him the basics. Other than that, he’s self-taught. I asked how he learned all those songs, and he said, “A lot of practice.”

I told him I could sense that he expressed the divine within himself through his guitar playing. I also told him that his music is very inspired and healing, and that he could heal a lot of people with it. It’s not just his guitar, but his whole body that is his instrument, and it can be an instrument of healing for people and the world.

I hope I have the opportunity to help this man share his gift with many people, the way he expresses his connection with the divine through his joyful spontaneity and creativity. I invited him to Sedona, and I hope he can come to Korea as well. He asked me to join him for lunch tomorrow.

Then I went home and had a fabulous time dancing to every song on his CDs.