Study of My Workspace #2: A Life of Honest Poverty or Honest Wealth?

Right now in my room I have many books written by the Korean Buddhist monk named the Venerable Beopjeong. His books are very popular in Korea, and I like to read them often because his elegant writing reflects his heartfelt passion and integrity. He was someone who “practiced what he preached.”

Although I love and respect the Venerable Beopjeong and the lifestyle of honest poverty he chose, I also feel that there is value and meaning in a life of “honest wealth.” Wealth that is acquired through honest means in harmony with the rest of society has merit, not just for the individual generating it, but for everyone. 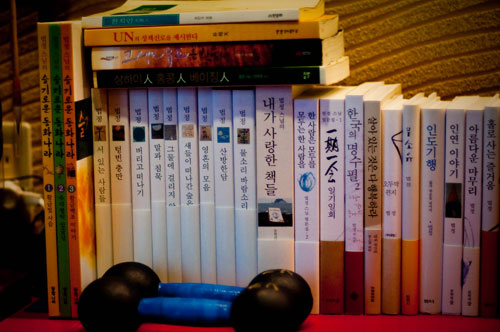 For example, the affluent Choi family of the South Korean province of Gyeongju has lived in honest wealth for 12 generations, or about 300 years. They are well-known in Korea because it’s rare anywhere in the world for one family to sustain their wealth for so long. But they are also known for the firm and conscientious philosophy that guides how they acquire their wealth and what they do with it.

The Choi family consistently follows six family standards for a life of honest wealth. One of these six standards is that in lean years they do not increase their assets, showing they are wise and not greedy. Another is that they have to make sure that no one starves to death within a 30 mile radius of their family home. In other words, the Choi family does not make money at the expense of others and are conscientious about the people around them.

Actually, to me, having that value is more important than whether you have many possessions or not. A meaningful, fulfilling life—a Jangsaeng life—is about choosing your values and principles, and then living a life that’s in line with those principles. If you respect the idea or intention of a life of honest poverty or honest wealth, but then don’t incorporate that intention into your everyday life, what good is that? It’s like praying without taking action.

Both the Venerable Beopjeong and the Choi family of Gyeongju Province lived a Jangsaeng life in their own way. I hope there will be many people who will follow their example and actualize honest wealth with the mindset of honest poverty so they can share their blessings widely.