Sharing My Dream in New Zealand

Opportunities often arise if you keep looking for them and sharing your dream. When one Dahn Yoga member in the U.S. heard I was in New Zealand for the last couple of weeks searching for property that could be used as a meditation and training center, she contacted her grandmother who lives in New Zealand. Through a lot of quick communication and follow-through, she and my administrative staff organized an intimate screening of my educational film, CHANGE: The LifeParticle Effect. Last Wednesday evening, on April 2nd, as I stood in front of the twenty-two people who had gathered at short notice at the home of Gina Garcia in the small, quiet village of Kerikeri, I was so grateful for their interest and presence. 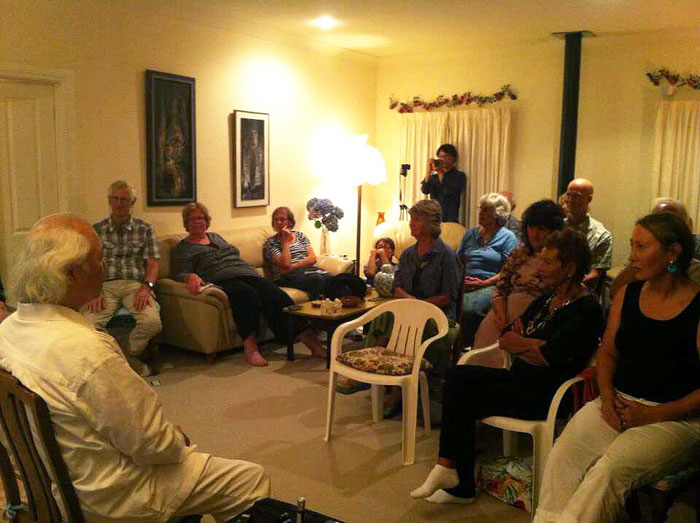 I poured my heart into sharing my own story of personal development with them and into guiding them in mind-body training so that they could sense their great potential and have hope for the future. Before watching the film, we all gathered outside and faced the setting sun and used feeling the sun’s light to relax and look within. 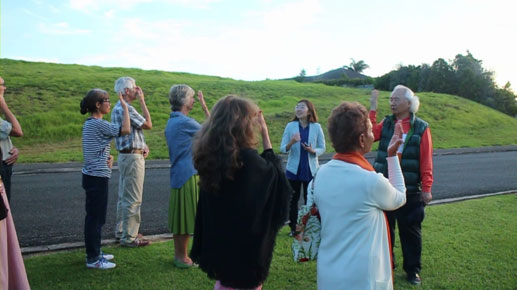 After watching CHANGE, I told them that everyone has an animal aspect and a spiritual aspect. The difference between a human being and a dog is that a dog cannot ask the question, “Who am I?” That line of questioning leads you to the discovery of your soul. Although all people have a beautiful soul, feeling that soul requires developing the ability to sense energy in the same way you learn to swim or ride a bicycle.

Then I explained that there are three forms of energy: light, sound, and vibration. I helped them experience these different forms of energy with light training and music meditation. In addition, I helped them feel their body’s energy with their hands in a meditation called Jigam, which hails from the Sundo tradition of Korea. The sight of all of the people sitting around the living room with their eyes closed, finding their own unique rhythm as they felt the energy in their hands, was a special and touching. After this experience, I let them know that by finding their own rhythm like that and getting in touch with a deeper part of themselves, they could make real changes in their lives. 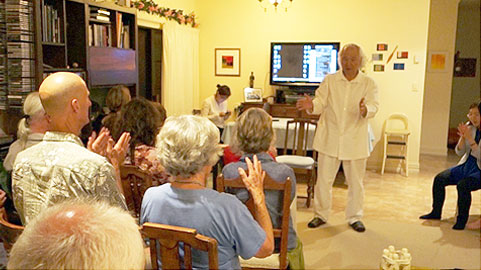 Although none of the participants had prior training experience, they responded with great enthusiasm and passion. After the lecture, I was flooded with questions about how they could do this training, how they could hear a lecture like this again, and what my future plans were. I directed them to ChangeYourEnergy.com, which has online classes based on Brain Education, and I also collected their e-mail addresses because they showed a lot of interest in my books.

Telling them about my future plans, I introduced the idea of Earth Citizenship to them and showed them an “Earth Citizen Passport” that I had made ten years ago. I told them my dream of 100 million people who identify themselves as Earth Citizens who transcend the boundaries between religions and nations and share stewardship of the Earth as a core value. Taken together, Earth Citizens will form a kind of Spiritual United Nations (SUN). When the people of the Earth view the Earth as a whole, then we can manage the Earth’s resources as a whole, or engage in Earth Management.

I feel that this first screening of CHANGE in New Zealand is creating a new decade for that dream to come true. The essential factor for achieving it is insung, or human character, and insung youngjae—heroes who are gifted in terms of strength of character and integrity. That’s why I established the Benjamin School for Character Education in South Korea to help youth develop their character and integrity.

Once again, I feel that everything is ready, and the dream of Earth Citizenship and Earth Management is getting closer. That’s why I share this dream and Brain Education wherever I am and with whomever I meet.

Receive weekly inspirational messages from Ilchi Lee:
Previous Post
What Is the Soul?
Next Post
[Video] The Soul of Sedona Inspires Change