In the utopia of Mago Castle, everything operated by self-government. Human behavior was not bound by any artificial laws or systems. Because every person behaved freely according to their pure and natural True Self, they did not cause harm to others and everything was harmonious and peaceful.

As humans lost their original nature, however, they slipped into satisfying their five senses and selfish desires. Self-regulation was destroyed, and artificial rules and systems appeared in order to maintain community living.

In order to gain more of artificial values such as money, power, and fame, conflict and struggle between individuals and groups took place. Human beings compromised and destroyed the earth’s environment. Many people grew distant from themselves, losing health, happiness, and peace.

Now, it is necessary to correct value systems in which priorities are out of order, to properly see what’s important in our lives, and to protect and restore values that are natural and absolute. We must think, choose, and act based on standards for values that are truly right and proper. Only then can we produce a world that is peaceful and sustainable, and where individuals can also find health, happiness, and peace.

Bokbon is a Korean term that refers to recovering original human nature—the naturalness inside of human beings. It’s about intrinsically pursuing harmony and synergy. When you feel one with nature, you discover the center of Life. When you follow your natural sense of harmony in your everyday life, your natural healing power is recovered and you live a life of health and vitality. Limitless creativity awakens. 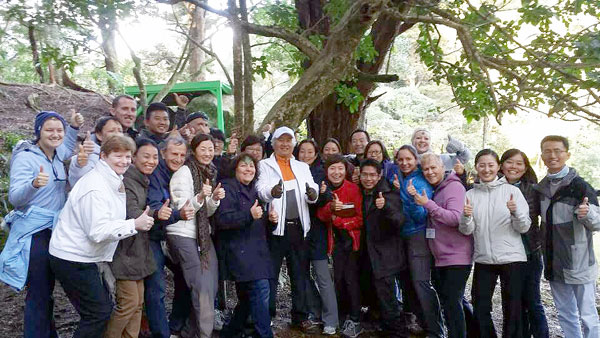 Photo: Seeking bokbon together in New Zealand with a meditation tour group from the U.S.

If you know and feel that you are not separate from nature, you will look after not only the health of your own body, but the health of other people, the communities to which you belong, and beyond that, humankind and the earth along with it. It is not science, technology, or business management techniques, but this kind of mindset that will solve earth’s problems. That’s the heart of earth management.

Not just one or two people, but one million, ten million, and 100 million people must have this kind of awareness. When these people combine their strength, new politics, economics, education, and culture that can save the earth will emerge. That’s the one and only hope for humanity.

Bokbon means recovering the nature inside of us to manifest a culture of reaching oneness and wholeness individually as well as collectively now on this earth.