Knowing Who We Really Are Is the Answer to Our Problems 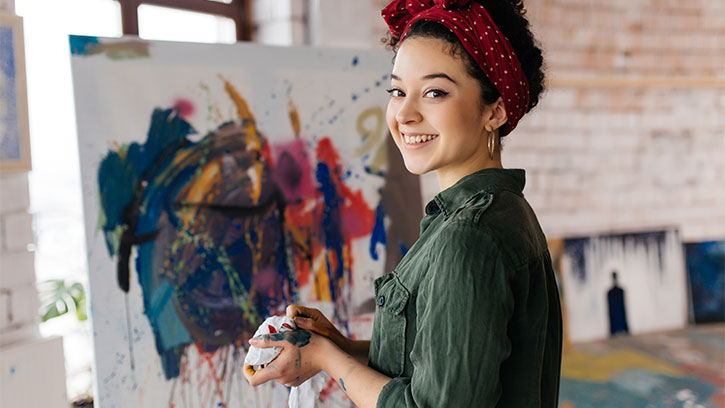 [Photo by garetsworkshop via Envato Elements]

As we live our lives, we tend to draw pictures of ourselves. We draw them for others, and for ourselves as well. Our pictures look like the way we want to be. Sometimes we draw up several pictures, one for each situation. Sometimes we imitate one person or another.

There are deeper pictures of ourselves, however, that we haven’t consciously drawn. They are pictures we can’t seem to do anything about. Those pictures were drawn before we were twelve. Our childhood experiences formed pictures of ourselves and the world that we revert to over and over, no matter how much we try to change. We can become a slave of those pictures, screaming and banging our heads against a wall in protest.

Such memories, though, can float away without affecting us, as if on a flowing river. We can dump them all away. They have nothing to do with us once we realize that they’re just pictures we drew in the past. But we don’t realize that, and there are things that our own ideas love. Our pictures are convincing—too convincing to throw away, and they may be all we’ve known. So they stick with us.

Even more, we may think that being like a certain person or being a certain way will solve all our problems, and our own pictures don’t satisfy us. We keep trying and copying different pictures as we tell ourselves that we took care of things. But does that really help?

Our Pictures Don’t Fix Our Problems

There once was a celibate Buddhist priest who was overwhelmed by his own sexual desires. He felt that he was very filthy. It wasn’t a picture that he liked. So he took a knife and just cut it off. Do you think that kept him from thinking of such things? When we’re scared, if we try not to think scary thoughts, do those thoughts come to mind, or not? Actually, more come to mind, not less. After erasing the thoughts we don’t want to think, we keep thinking them, deceiving ourselves.

Let’s say that some people who are fasting haven’t eaten. They’ve fasted well for one week. Then, when they start eating, they eat what they went without for a week all at once. What happened as they endured their hunger? They kept inputting into their brains the thought of rice, bread, sweet potatoes, etc. Then, after suppressing these urges for a week, they just let it all go.

By stimulating the thoughts of what they were trying to get rid of, they continued to intensify their situation instead of solving the problems they should solve. They endured, regretted, and didn’t act, continuing to put their stamp on such thoughts. So, then, these things in the brain pounce, demanding payback with interest.

Say someone dislikes caterpillars and leeches. If you ask them why those insects seem creepy and keep explaining that they’re not creepy at all, they’ll seem even creepier to that person.

There is no human being who has never been stuck in such negativity, in fear or despair, at least once. It is even worse for people who grew up in poor environments. They have countless memories that come back even when they try to move on. Generally, they think that those memories are who they are.

Who You Are Before Being Subjected to Other Influences

Then, if we are not our memories, pictures, or experiences, who are we? If creating a new picture can’t solve our problems, then what should we do?

Many of the sages and enlightened people throughout the ages have come to similar conclusions, although they may have used different words: We are nothingness (Mu in Korean).

If we really understand that we have nothing, then all the memories and pictures we think about are really nothing at all. We are hanging on to emptiness, to nothing at all. It’s nothingness.

If we peel an onion and keep peeling it until we get to the inside, is there anything left? There’s nothing there. There is nothing eternal for those who always search for something, in whatever form or whatever world. Try to think of nothing existing at all, of Nothingness, of a great Emptiness, as your true form. Then you will find peace.

Then there isn’t any need, really, to try to force yourself to change somehow, is there? That is who you really are. That is perfect. If you have some form, whatever it may be, that form is imperfect. Something is pressing down on your heart. You’re lonely somehow. What is that? Who is it that’s lonely? It’s like a ghost is playing a joke on you. If you understand that Emptiness is who you really are, then you will find no guilt or fear or loneliness.

“I will now change somehow.” Don’t resolve to do that. Instead, center your awareness in the nothingness inside. Feel and trust the cosmic energy and cosmic mind that is that nothingness, and head solely toward your life purpose. Crash against any obstacles you meet and receive the revelations that come to you.

In that sense, don’t worry about what you will eat or drink. Don’t think or be anxious about what hasn’t yet happened. And don’t always be unhappy over things that are completely passed.

What’s important is this: Who are you really? You are Emptiness, and Emptiness is an infinite world, an eternal world. It has no beginning and no end. Remembering this and moving forward with the life energy inside you, you’re bound to become very simple. Do people with a lot of worries suffer from insomnia, or not? Uselessly they wander, unable to forget what’s already passed and continuously unable to sleep. Mired in the past, they can’t work, either. The problem is that their memories are too good. Forget what should be forgotten.

If, unable to rest in the seat of Emptiness, we become attached to some form or some picture we’ve created, then we become mired in darkness. Everything we have been doing with our bodies has been trying to depend on a form, and it has been wandering in search of a better form. What we have understood has been completely meaningless.

So, once we really understand the world of formlessness, the world of emptiness, we’ll have no regrets. That’s because, instead of chasing a picture, we will be creating all form ourselves.

Receive weekly inspirational messages from Ilchi Lee:
Previous Post
A Meditation Aid: Bitter Flavor
Next Post
How to Make the Energy of Gratitude: It’s Already Inside